History - Even a Sexual One Has a Way of Repeating Itself

Some years ago I was listening to a member of the graduating class of the Liberal Arts University I attended deliver her commencement address. This wonderful young lady gave such a moving and memorable speech.  The part that stood out for me most was the following line: “We learn so much about history but we never seem to learn from it!”  These prophetic words would visit me time and time again.  Much has been said and written about sex and yet we do not seem to learn from it. 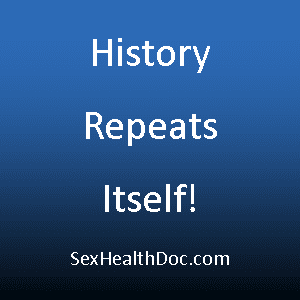 What I see lacking many times is the motivation to change.  I apologize ahead of time for using a mechanistic analogy but many times I can explain to an individual or couple how the sex “engine” operates but that does not change its function.  In other words, just knowing you have 6-cylinder does not change into a V-8.  So the real question we need to continually ask ourselves is how we can learn from what we know about sex?

The Beiter Sexual Preference Indicator, BSPI tells us that women and men do take up their sexuality differently.  Men appear to be more restrictive in their sexual expression while woman appear to be more variable.  The cultural messages for both men and women differ and that would help answer the difference.  As I think about it from a male perspective, I am reminded that many men were introduced into their sexuality around three common themes: secrecy, privacy and impersonal.

For many of us our first exposure to the sexual in life was through printed images be they paper or videotape, that is through magazines or movies.  There was usually no dialogue going on with anyone when were first exposed – no pun intended.  No one sat me down and said, “ok, here is what is going on and what you are most likely to experience physically and emotionally and sexually.”  It was a private moment and a secret one and we typically do not know the person we are being exposed to – pun intended.  Even if our masturbatory trail was discovered, i.e. wet dreams, dried semen on sheets, towels, t-shirts, etc. nothing was usually said, thus, enforcing a code of secrecy and privacy.  Now let us add on top of this scenario, years of conditioning that is self-pleasuring to the point of orgasm without an emotional or intimate connection to anyone and what do you think we get?  Now try and couple this with an individual who has been “conditioned” to think that sex is special and should be reserved for that one special person whom you plan on establishing a long term relationship with and the result is – no surprise - sexual dysfunction or an inability to connect.  However, for many there is a surprise and once again I want to remind you that we need to go back to my original point that we have learned much “about” but little “from” and in my mind – no wonder!

I see it every week in my clinical practice.  A wife discovers – through the history function of the family computer – her husband surfing the Internet looking at pornographic images at night after she falls asleep and he is reprimanded into therapy because he has betrayed the trust in their marital relationship.  When asked if he would be there [in therapy] if he had not been caught – the answer is always “no”.  Typically, the only thing he sees “wrong” is that he got caught and that she is emotionally upset, but he does not rest the status of the relationship as having had an affair.  Often for him it was no different than what he has been conditioned to do when he feels “sexual” and that is go into private, secret and impersonal mode.  Does it mean that he is dissatisfied with his sexual relationship with his partner sometimes yes and more often “no”.

Unfortunately, it takes events of these magnitudes to start the often, continued awkward dialogues around sexuality and to go even further around what arouses us to the point of distraction.  Does it not seem obvious that we could save ourselves a whole lot of grief and aggravation if we would just start educating everyone earlier with clear and consistent messages about human sexuality?

Want to talk?  Visit the Contact page at SexHealthDoc.com.
Posted by Unknown at 10:00 AM